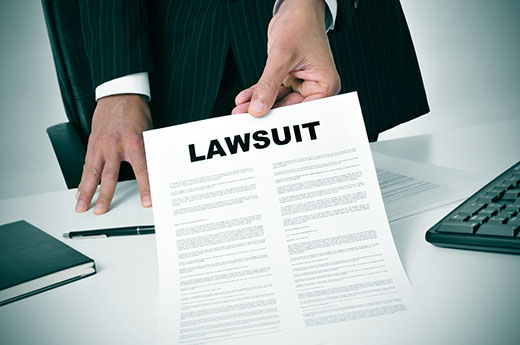 When differences arise between two involved parties and they are unable to reach a conclusion, those involved may decide to work things out in the Court by filing a lawsuit.  In a situation where money is the subject being disputed, the ultimate goal of a lawsuit would be for the court to order the defendant to pay the plaintiff the money owed to him/her.  For example, if you have borrowed money from a creditor and have failed to pay them back as planned, the creditor may choose to file a lawsuit to grant them a wage garnishment or bank levy.

WHAT HAPPENS IN A LAWSUIT?

If the defendant is successful in providing the Court with an answer on time, the discovery process begins.  Discovery serves as the evidence in a lawsuit.  Both parties will gather any information that may serve as evidence to the Court and use it in favor of their argument.  All written discovery must be submitted within 30 days.  Discovery includes questioning witnesses to confirm the facts you are presenting are true.  The opposing party has the opportunity to question these witnesses as a technique to demonstrate any discrepancies.

During a trial, both parties will have the opportunity to present their evidence, including any documents or witnesses they feel may help convince the Court in their favor.  After each party has presented their evidence and issued their closing arguments, the court will evaluate all information to reach a verdict.

ALTERNATIVES TO A TRIAL

When dealing with lawsuits, a trial is not the only way for both parties to reach an agreement.  Other options include:

If you have fallen behind on payments to your creditors, they may choose to file a lawsuit with the Court to grant them permission to take further actions.  If you do not file for bankruptcy, the Automatic Stay cannot protect you and the lawsuit will be filed.  A creditor lawsuit may result in the following:

WHAT DOES A BANKRUPTCY DO?

How Does A Chapter 7 Bankruptcy Help?

The Chapter 7 Bankruptcy process is a court administered liquidation wherein the goal is to eliminate your dischargeable debt. The Court, and more specifically the Trustee assigned to your case, is obligated to determine whether you have enough assets that are unprotected in your Chapter 7 that they can liquidate them and make money for your creditors. At the same time, you are allotted protection on your assets up to a certain monetary limit. Most situations result in all of the assets being protected and the trustee unable to liquidate anything. If, however, there are unprotected assets to liquidate, the trustee’s job is to do exactly that----sell them and pay the money to your creditors. Ultimately, the goal is to receive a discharge. In most situations, we can accomplish this within approximately 3-4 months. The Discharge acts as a permanent injunction on the creditor from attempting to collect on the debt again. Thus, if you are being sued and you end up filing for Chapter 7 bankruptcy and receiving a discharge, you no longer have any personal obligation to that creditor and essentially, the lawsuit is over.

How Does A Chapter 13 Bankruptcy Help?

The Chapter 13 Bankruptcy process is quite different than a Chapter 7 but still provides exceptional relief when dealing with a lawsuit. Chapter 13 is a process where a person reorganizes his/her debts and commits to a 3-5 year repayment plan. In that plan, they are obligated to pay certain debts back in full---certain debts might only get paid a portion of what is owed---and some might not get paid at all. At the end of the Chapter 13 case, the person who filed receives a discharge, just as they would have in a Chapter 7. Again, this Discharge eliminates certain obligations so you no longer have any legal requirement to pay on them again. By doing this, you would avoid having your income garnished, your bank levied, or liens placed on your assets. Whether your best option is to file Chapter 7 or Chapter 13 is something we will need to discuss, but these options should be considered if you are looking for relief on a pending or soon-to-be pending lawsuit.

HOW CAN WE HELP?

Being served with a summons and complaint can catch you off guard and be a stressful process.  If you are served, contact us immediately to speak directly with an attorney regarding your situation.  We will work with you to determine whether or not you will need to go to trial or continue with another method.

Get the Financial Freedom You Deserve.

Modesto Bankruptcy Attorneys were amazing. They were there for me every step of the way and explained every...

I had to make a hard decision on filing for bankruptcy and was very confused and lost with my situation. Paul...

My husband and I are thankful to have Simran on our side. He was compassionate and professional during our...

Modesto Bankruptcy Attorneys and staff are the best. They are very knowledgeable and patient. Because of them,...

Having to file for bankruptcy is never a fun life experience. But thankfully with Paul and his amazing team,...

I have referred this group individuals who have needed assistance several times. They have handled each case...

Paul is great to work with. He explained everything in detail and made the process a better learning...

Paul was very prompt in responding to my inquiry. He understood my situation and provided expert legal advice....

Paul was extremely knowledgeable and professional about educating me on my legal options and made me feel very...

Great attorneys. Mr. Bains and Mr. Hundal are professional and caring. Highly recommend them for anybody who...

This is an excellent firm run by highly qualified attorneys. Their service was superb. Will be coming back.

Paul Bains is the best! If you need someone who is experienced and cares to help you, look no further. I've...

A professional firm that puts people before money. They went above and beyond on my case and got me exactly...

Paul and Simran are a fabulous team working together. They bring professionalism and trust at the core of...

Best bankruptcy attorneys in Modesto if you are looking for affordable representation. Do not waste your time...

Being very knowledgeable and professional, Paul and Simran will walk you through the entire process and help...

Paul and Simran were fantastic in helping me during this crazy time we are living in. They were always...

Provided me with great guidance and knowledge with the problems I was facing. I would highly recommend Mr....

Highly recommend this firm. Very knowledgeable and courteous. Definitely would use this firm in the future.

Simran and Paul were very professional in my dealings with them.  We did all of our correspondence via email,...

Paul and Simran provide excellent services.  Professional and responsive. Attorneys that address their...

Was referred by a friend and was not disappointed. Seem to have your best interest and outcome for you instead...